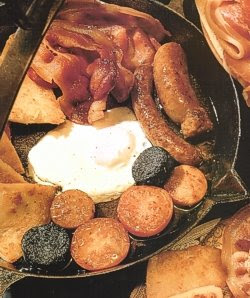 http://www.europeancuisines.com/
Cousin to the Irish breakfast or "full Irish", the Ulster Fry is possibly the single dish most closely associated with Northern Ireland.

There are, however, some vital differences between the Fry and the Full Irish. Officially, the Fry does not contain anything that can't be fried in bacon fat. This means that ingredients that have sneaked in from other regional Irish and British fry-ups (such as baked beans) don't belong in the Fry.

The Ulster Fry is available all over the North both for breakfast and (in cafes and casual restaurants) as a lunch and dinner dish. It's as close as this island comes to the "all-day breakfast" concept. The Fry is meant to be hearty and substantial, and any attempt to render it in low-calorie form is destined to fail, as the ingredients (except for the potato farl and soda farl) are already too high-cholesterol for grilling them to make much of a difference if you're going to be eating them all at once. The key to keeping an Ulster Fry from doing long-term harm to your cardiac health or your waistline is simply not to eat it every day, or maybe even every week. But if you're going to make it, make it the old-fashioned way.

The is a basic roster of ingredients without which an Ulster Fry isn't genuine.

They are:
Other ingredients that sometimes get involved, either as a garnish or as elements of other regional breakfasts that have slithered into the equation from the outside, are white pudding (a sausage like black pudding but without the blood), tomatoes, mushrooms, and fried bread.

Making a successful Fry is something of an exercise in logistics, as the various ingredients need different cooking times. You'll need to work out first how many guests you're having.

For each fry-eater, you'll need:
Once you've sourced your ingredients and have everything ready to go, you start out by frying the bacon in a heavy frying pan (cast iron is best), as you need its fat to fry everything else in. (A local cook with access to lard will refresh the pan with that, if necessary. However, no one would look down their nose at good Irish butter in this context if the bacon fat runs low. But some Northern cooks would simply say, "You didn't fry enough bacon.")

First, preheat your oven to a low "holding" temperature -- say 100F / 50C -- and prepare a a covered platter to keep the various ingredients hot on while you're working with the ones that come after them.

Having fried up the bacon, remove it from the pan to the covered dish and keep warm. Then fry the sausages in the bacon fat. (Prick them first so they won't burst while frying.) When they're done and removed to the warm covered platter, fry the slices of black pudding (and if you're adding it, the white pudding.) Once the pudding slices are done, remove them to the warming platter and fry the potato bread and soda bread. Then, when those are finished, put them in the warming platter with everything else, and fry the egg or eggs.

Place the eggs on warmed plates and arrange the meats and fried breads around them. Serve with a sharp brown sauce (the British / Irish version of HP Sauce, now available in some North American groceries, is perfect), salt and pepper, and hot strong Irish breakfast tea.

About finding the raw materials: Some of the ingredients of the Fry are rather specialized. For North Americans, standard bacon will work fine -- it's not identical to Irish bacon rashers, but perfectly acceptable.

The recipe and technique for making soda farl can be found at our soda bread page. The potato farl recipe is here.

Finding black and white pudding can sometimes be something of a challenge in the US (less so in Canada, where the British / Irish breakfast tradition is somewhat better represented, especially at the British-based chains like Marks & Spencer). Fortunately, some of the higher-end supermarket chains in major US markets have started carrying black pudding and sometimes even white pudding, either locally made or imported. If you have one of these high-end chains nearby, it's worth checking to see if they have one of the great Irish pudding names like Clonakilty. (Also, if you're lucky enough to have a specialty store near you that handles Irish or British foods, you might see if they can order black pudding in for you.)

Additionally, a company called FoodIreland.com has started producing Irish-branded foodstuffs in the USA under license from their Irish makers, as well as carrying locally-produced bacons and puddings which are being made by Irish people now living and working in the US. These products enable you to get quite close to the genuine effect without paying insane import prices for the original Irish foods. They carry Irish-style white and black puddings and the Irish-style (chipolata) sausage, as well as Irish style "back" bacon (the pork cut from which Irish rashers are sliced is equivalent to the North American pork loin).

Also: iGourmet.com carries Irish teas, as well as various jams and jellies, the famous Kerrygold butter and Lakeshore mustards and sauces, and a nice collection of Irish cheeses, if you're interested.

(This recipe is part of the 2008 Festival of Traditional Irish Saint Patrick's Day Recipes at EuropeanCuisines.com.)
Posted by ey at 5:10 PM