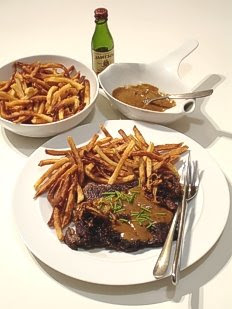 http://www.europeancuisines.com/
This dish is a fairly modern one -- dating back not much further than the last century -- and the name "Gaelic" may be doubly appropriate, since the basic concept may possibly have been adapted into Irish cooking from that other great nation of the Gaels, Scotland.

Naturally this works best with Irish beef. But those who have no access to that should seek out a butcher who at least ages his or her beef for ten to fourteen days before sale. Prime ingredients are important for this dish.

EuroCuisineGuy, our local expert at the whiskey end of things, suggests that the cook should select a stronger-flavored Irish whiskey like Jameson's, which is robust enough to stand up to the deglazing process that produces the sauce without losing its unique character when the alcohol cooks off. Additionally, there are versions of this recipe that call for flambéeing the steak in the whiskey. EuroCuisineGuy suggests that this is just showing off, and feels strongly that simply reducing the whiskey and then further reducing the sauce after adding the cream produces a better flavored final result.

Pat the steaks dry with kitchen paper and season with pepper. Heat a cast iron frying pan or other heavy pan over high heat. When very hot, add the oil and butter. When the butter foams, add the steaks to the pan one at a time, and turn after 20-30 seconds to seal both sides. Lower the heat to moderate and complete cooking (3-4 minutes for rare, 4-5 minutes for medium, 5-6 minutes for well done). Leave each steak undisturbed on one side for half the desired cooking time: then turn. When finished, remove to warmed plates, and keep warm.

Add the whiskey to the cooking juices. Be careful if you are cooking with gas, as the whiskey vapor might catch fire. If it does, lid the pan immediately to stop the burning. Scrape the pan with a spatula to loosen the nice burnt bits and dissolve them and the meat juices into the whiskey. Allow to come up to a boil and reduce for a few minutes, stirring and scraping all the while.

Add the cream, lower the heat slightly, and allow to simmer for a few minutes and reduce further. Check the seasoning (you may find that you do not need salt for this dish: don't just season it without checking). Having seasoned the sauce to taste, pour it over or around the steaks, as preferred, and serve immediately.

French fries / chips are a good accompaniment for this, as are fried mushrooms, and a fresh green vegetable like new peas.

(This recipe is part of the 2008 Festival of Traditional Irish Saint Patrick's Day Recipes at EuropeanCuisines.com)
Posted by ey at 4:54 PM