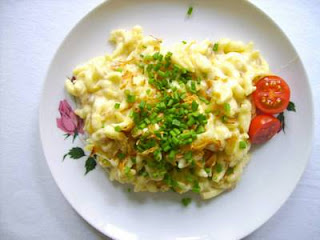 Kasnocken or Käsespätzle (cheese noodles) are a dish which you will often find in Tirol and Vorarlberg, Austria's mountainous region. Spätzle are tiny egg dumplings that can be made with a Spätzle maker. Prepared Spätzle join sauteed onions and grated cheese in a pan, the cheese melts and the hearty dish is served with green salads.

As with many other typical Austrian dishes there is no ruling recipe, every cook has an own special way to make the best Kasnocken. I have been working for quite a lot of hotels, restaurants and pubs (Austrian Gasthaus) in every corner of the country and everywhere they have the "right" version of the recipe for Käsespätzle.

Some even bake it in the oven instead of in a pan on the stove, that's not the point, the point is to make the cheese melt over the tiny egg dumplings and that occurs in the pan as well as in a baking dish in the oven.

I vote for a pan, an iron one. A pan in which you can scratch, one of those "I am just a normal, iron pan" - not the ones "No sticking". My personal not so secret secret is this: I sautee the onions, just kind of melt them, no color. Then I add the Spätzle and the grated cheese and a spoonful of stock or broth to make that cheese melt better.

When the cheese melts, it wants to stick on the bottom of the pan. I let it stick, almost let this burn a little, get some color. Then I scratch off this sticking cheese from the pan's bottom and stir to combine with the rest just to let again stick some of the cheese and almost burn. Scratch off and stir, by this you get tremendous taste into the dish.

But that's just my version. You can also use the following recipe and use a non sticking pan and bring the cheese to melt and stir and serve, the stinkier the cheese the better.

Feeds 3: Sautee the onions
In a pan heat the vegetable oil and butter and sautee the sliced or chopped onion until slightly colored.

Add Spätzle and cheese
Add the noodles and stir and combine making sure the Spätzle are heated through. Turn to moderate heat and add grated cheese now. Pour in the liquid e.g. broth or water so the cheese melts better. All that liquid will vanish, we do not need it, it is only good to make the cheese melt better and equably spread it within the Spätzle.

Stir and combine
All should bubble and sizzle and you should stir good. If you use a scratch-resistent pan you might do as I described above. otherwise just stir and make the cheese melt and the liquid vanish.

Taste
Sample a spoonful of your Kasnocken. The Spätzle already have some taste from its recipe, the cheese is salty by nature. Adjust seasoning with salt and pepper to your liking.

Serve
Serve Käsespätzle topped with chopped chives and if you want, as seen in Tirol, with prepared crispy onion rings (or what is left from them after all have broken into tiny bits - like mine!!!) Green salads go very well with this hearty dish.
Posted by ey at 6:17 PM