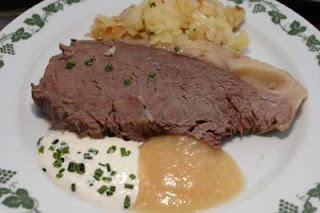 Tafelspitz – boiled beef, is a typical Austrian dish. A well-hung piece of beef from the rump of a young ox is used to be boiled with root vegetables.

The name Tafelspitz is the name of the meat cut which is used. Austrian butchers gave almost every muscle a name. The hinder beef leg alone is parted into 16 cuts: there is for example the Hueferscherzl, Hueferschwanzl, Nuss, Wadlstutzen, Gschnatter, Schwarzes Scherzl, Weisses Scherzl, Duennes Kuegerl, Schalblattel also called Fledermaus ... Tafelspitz is only one of them but a delicious one for a boiled beef. It is located at the top of the hinder leg.

Alternatively, a similar cut of beef from a young ox, properly hung, with firm white fat (not yellow) can be used. The fat can be left on to prevent the meat from becoming dry.

The Austrian Emperor Franz Joseph (symbol of the Austro-Hungarian monarchy) was a great lover of Tafelspitz. "His Majesty's private table is never without a fine piece of boiled beef, which is one of his favorite dishes."

1. Boil the beef
Bring water to a rolling boil. Add bay leaves, juniper berries, peppercorn and the meat and cook for about one and a half hours. From time to time skim of the gray foam from the surface of the soup to make sure you have a clear soup at the end. This procedure is much like if you would cook a

In fact as Tafelspitz is a quite expensive piece of meat, many Austrian families buy other parts of beef that are not as exclusive as Tafelspitz but still delicious and Austrians always eat the soup that results from the cooking of the beef as starter as it is delighting and much tastier than a broth made just out of bones.

3. Serving the beef
To serve Tafelspitz cut meat against the grain into one inch slices, pour some of the broth over it and chop some of the root vegetables you cooked with the meat and accompany the meat with it.